Here you can tour our main building, the Thom Building.

The Duke of Edinburgh opened the Thom Building, a new eight-story tower block, in 1963. The building still serves as the centre of our department today, although it has seen some changes since then. In the 1960s, the Thom was served by a pair of paternoster lifts: taking two passengers per car, these ran in a constant loop, requiring passengers to jump on as it passed their floor (you'll be pleased to know the lifts have been upgraded since then!).

The Thom Building was designed at a time when drawing was still a key part of the engineer’s craft, and large, bright drawing rooms were considered vital. These rooms have since been transformed into our software labs.

Dr Alexander Thom became head of department in 1945. With petrol rationing still in effect, he was well known for his habit of meeting visitors at the train station with a tandem bicycle, ready to ferry them back to the Thom. During his time in the department, he oversaw the first dedicated scholarships for engineering students. This tradition of expanding access to education continues today, with bursaries, grants and scholarships on offer to a wide range of students.

Click on the links below for a 3D virtual tour of some of the labs and other student areas in the Thom Building. 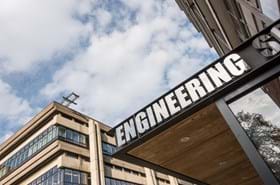