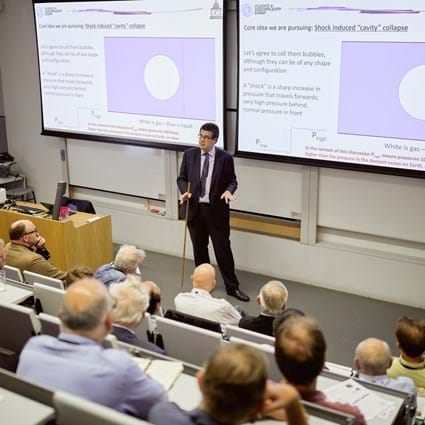 Professor Yiannis Ventikos describes the drive for fusion as a method of power generation in the 32nd Jenkin lecture, as part of the Alumni Weekend 2019

At our Jenkin lecture for Engineering Science Alumni this September, Professor Yiannis Ventikos (Kennedy Professor of Mechanical Engineering, University College London) described the work of Oxford spinout First Light Fusion in driving the pursuit for fusion power and that has its origins in a conversation with Professor Ron Roy 12 years ago.

From that initial conversation in 2008 and a subsequent 4th year student and later DPhil project on shock-induced bubble collapse, First Light Fusion spun out in 2011 and now employs over 40 people at its site in Yarnton, Oxfordshire.

The technology being developed at Yarnton involves using a projectile travelling at great velocity to produce a sharp increase in pressure, causing a cavity (or ‘bubble’) in a liquid to collapse. During his talk Yiannis demonstrated the concept behind this technology using a rubber mallet and a glass bottle filled with water – by striking the neck of the bottle, bubbles form at the base, expanding and collapsing rapidly - to dramatic effect.

Creating fusion using shock-induced bubble collapse involves sharp increases in pressure that result in dramatic increases in temperature, density and confinement time. Professor Ventikos showed some examples of shock waves with very high pressures more than 100 times higher than the pressure in the deepest ocean on Earth, the Mariana Trench.

Early tests with a gas gun and compressed air created speeds of up to 10,000 m/s (or 25,000 miles per hour, very close to the escape velocity from Earth) – fast, but not enough for fusion. This has been superseded by an electromagnetic launcher (now on its 3rd iteration), which delivers huge amounts of current very rapidly – equivalent to 500 bolts of lightning, or the USA and China electricity grids combined – discharged in 2 millionths of a second. This fires a metal projectile at 45,000 miles per hour onto a target incorporating a cavity in a liquid, generating plasma– this fourth state of matter where ions and electrons dissociate.

First Light Fusion are using computer simulations to design, test and analyse the precise nature of the target, aiming to get the maximum energy output from each impact. Once the technology has been validated and optimised, Yiannis believes it will revolutionise energy production.

"This is not a disruptive technology, this is a technology which will make everybody’s life a lot, lot better, a lot cleaner"

“This is not a disruptive technology, this is a technology which will make everybody’s life a lot, lot better, a lot cleaner”, he says. As an energy source, fusion would be safe, clear of emissions, infinitely available, producing very high energy density and able to be retrofitted into existing power plants. All of which Professor Ventikos believes may make it “not just an alternative amongst many other renewable options but the only realistic alternative for our growing needs and for the planetary scale emergency measures we may need to take to reverse the damage [of climate change]”.