Renewable energy development is rapidly expanding in the United Kingdom as the country seeks to reduce the carbon intensity of its electricity generation. Wind energy is the largest renewable energy source in the UK, providing over 18% of UK electricity in 2018, and is continuing to expand rapidly. The majority of wind energy development in the UK is now focused offshore, and the UK has been the largest developer of offshore wind energy in Europe in recent years.

Our research group investigates a range of questions that arise with such large scale development of wind energy, in particular the performance of large wind farms and the complex aerodynamic interactions that occur between turbines within the farms. We use a range of computational fluid dynamics simulations to develop both improved understanding and simplified models of wind turbines and wind farms. We collaborate with partners in  industry and academia, both in the UK and abroad, and work with the Supergen ORE hub. 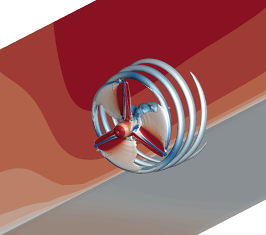 The group is interested in the aerodynamics of wind turbine blades, particularly towards the tips of blades where the three-dimensional flow effects associated with tip losses pose significant modelling challenges in current engineering models of wind turbines and the development of the near-wake region. We employ detailed blade-resolved CFD simulations in order to understand the flows around wind rotors. We are also actively researching the impact that blade surface degradation has on wind turbine performance, and exploring methods to mitigate the detrimental effect that this has on power production. 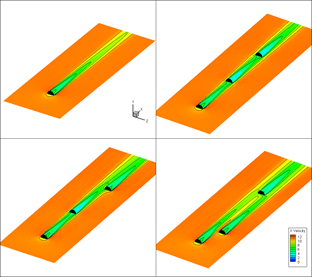 The wakes that develop between wind turbines can have a significant impact on the power and unsteady loading of downstream turbines. These wakes merge and evolve within wind farms in complex ways that depend on many factors including how the turbines are operating, the turbine layout and prevailing wind direction, and the stability of the atmosphere and ambient level of turbulence. Wake merging and evolution effects are particularly important in large offshore wind farms, where turbines are often deployed in a regular grid pattern and wakes can persist for long distances downstream of the turbines. We explore these effects using a range of CFD models of turbines and small groups of turbines to try and understand and lead to improved modelling of wake dynamics in wind farms.

Large wind farms present a significant level of resistance to the wind, which can locally affect the way the wind moves through and around the wind farm. There is a complex multiscale relationship between the performance of individual turbines and the aggregate performance of an entire wind farm and the effect on the wind resource. The emergent dynamics of large wind farms is of particular interest as the size of wind farms increases, including the extension of existing offshore wind farms. We are investigating these problems using both numerical and analytical models.

Large scale integration of variable energy sources into electricity networks presents a challenge to maintaining security and reliability of supply. However, some benefits can be realised by considering the wind energy supply to be averaged spatially across a number of wind farms; the wind doesn't tend to stop everywhere at the same time. Wind speeds also tend to vary seasonally, with stronger winds in winter (when electricity demand tends to be higher) than in summer. Understanding the spatial and temporal variability of the wind resource is important for understanding how renewable energy sources can fit into future electricity networks, as well as the role of and requirements for energy storage technologies.