A NetFPGA Project, and a collaboration between Oxford and Cambridge

NRG is an open-source hardware-software toolset with bandwidth and nanosecond-scale latency and jitter control, providing a black box representation of a data centre network. NRG also provides a programmable, hardware accelerated, line-rate monitoring frameworks that offloads information processing from the end-host to the network and alleviates the need for frequent network probing.

NRG can be either standalone or a core within a network device. It was prototyped on NetFPGA SUME, and ported to several other platforms.

NRG provides a realistic local evaluation environment that can provide each and every time the same (network) test conditions. Coupled with that, NRG also provides an emulation of the data center network as a "black box", in terms of latency and bandwidth. NRG provides nanosecond-resolution control over
latency combined with support of line-rate traffic. The data rate supported by NRG is the same as an instantiated network device (NIC, switch or bump-in-the-wire), and seamlessly scales with it.

How can NRG be used?

NRG can be used as a bump-in-the-wire, or as part of a NIC, a switch or a different network device. The released NRG project is demonstrating the bump-in-the-wire model, but our paper describes also an experience with switch integration.

The architecture of NRG is built from in-band traffic control (delay and rate control) and out-of-band monitoring. Each of the modules can be instantiated independently of other modules.

What are Network Profiles?

Small network changes may produce large performance changes. Network Profiles refer to a collection of network related characteristics and their relation to an application’s performance. Network profiles are designed for users with an application to deploy and a given system setup who wish to know:

NRG allows to run on a local setup experiments that actively change network conditions (bandwidth, latency, burst size) and passively collect network statistics (e.g., inter-packet gap, link utilization, flow size). This collection of network conditions and statistics is the Network Profile of an application on a
given setup.

The figure below shows an example of visualizing part of the network profile of Tensorflow (parameters server mode) as created using NRG in our environment. The figure shows Tensorflow's (normalized) training time dependence on bandwidth and latency. 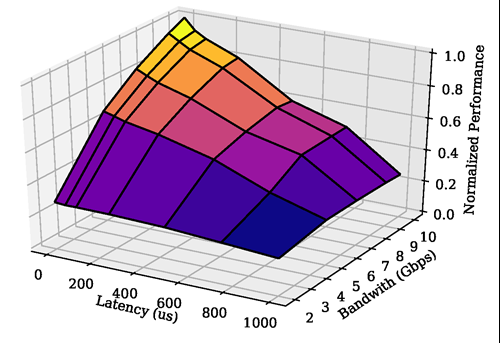 What is the available data?

Over the time that we have worked with NRG, we have collected a very large dataset. A lot (though not all) of the experiments also included packet capture using Exablaze (now Cisco) ExaNIC, with nanosecond precision.

Due to the size of the dataset, we are still preparing some of the data to be released. Please contact us to request access to specific data that is not included in the release.

How do you pronounce NRG?

Please use the following reference to cite NRG:

Dataset - not live yet