The Cryogenics Group has been involved in space cryocoolers since 1978, primarily invoved in Stirling cycle and Pulse Tube refrigeration. There are several other types of cryogenic/cooling systems used for space applications, however, and these are described below.

A brief introduction to coolers used in space

Passive coolers are those which require no input power and there are two types in common use:

1- Radiators. Radiators are panels radiating heat according to Stefan's Law and are the workhorse of satellite cooling due to their extremely high reliability. They have low mass and a lifetime limited only by surface contamination and degredation. It is important, however, to prevent the surface from viewing any warm objects and the device must therefore be carefully designed taking the vehicle's orbit into account. They also have severe limitations on the heat load and temperature (typically in the milliwatt range at 70K). Multiple stages are often used to baffle the lowest temperature stage, or `patch', and it has been shown that efficiency is nearly optimized with three stages, although two is often enough. In this case the first stage consists of a highly reflective baffle (e.g. a cone), to shield the patch from the spacecraft, Earth or shallow-angle sun-light.

2- Stored cryogens. Dewars containing a cryogen such as liquid helium or solid neon may be used to achieve temperatures below those offered by radiators (heat is absorbed by either boiling or sublimation respectively). These provide excellent temperature stability with no exported vibrations but substantially increase the launch mass of the vehicle and limit the lifetime of the mission to the amount of cryogen stored. They have also proved to be of limited reliability.

Passive coolers have been used for many years in space science applications due to their relatively high reliability and low vibration levels, however these are now joined by coolers requiring input power, so called `active' devices (also termed 'cryocoolers') Active coolers use closed thermodynamic cycles to transport heat up a temperature gradient to achieve lower cold-end temperatures at the cost of electrical input power. The first long-life active cooler system successfully operated in space was a cluster of four rhombic-drive, grease lubricated Stirling cycle machines launched in 1978 aboard DOD 1-78-1 developed by Phillips and cooling two gamma ray detectors. Although these showed significant performance degredation on-orbit they operated sufficiently well to keep the payload operating until it was destroyed during a successful test of an anti-satellite interceptor in 1985. Since this first generation the flexibility and reliability of active coolers have proved major contributors to the success of many missions. The major types of active cooler are:

Usually the coolers can be run at lower or higher temperatures with correspondingly lower or high heat lifts.

Some examples of missions using the above coolers

Stirling cycle coolers at the University of Oxford

In 1978 the Department of Engineering Science was awarded a contract to construct a small, long life Stirling cycle cryocooler for cooling an infrared instrument called ISAMS (Improved Stratospheric and Mesospheric Sounder), aboard the UARS (Upper Atmosphere Research) platform. These coolers were jointly developed by groups in the Physics and Engineering Departments at Oxford and at the Rutherford Appleton Laboratory. The two devices were designed to provide 1 W of total focal plane and detector cooling. The instrument was launched in September 1991 aboard the Space Shuttle and operated for 180 days before the instrument failed due to a chopper problem. During this time the cooler worked to specifications and was a powerful demonstration of the usefulness of long-life cryocoolers in space.

The ISAMS cooler was the result of extensive development over 10 years by the three groups involved and incorporated several important design features to prevent the failure and performance degradation commonly associated with other mechanical coolers and the first generation devices mentioned above.

First Generation machines have proven reliability, but are expensive to produce. Hence the need for lower cost, simpler machine for tactical cooler market (e.g. aircraft applications). In collaboration with Honeywell Hymatic a range of integral cryocoolers was developed to meet these needs. 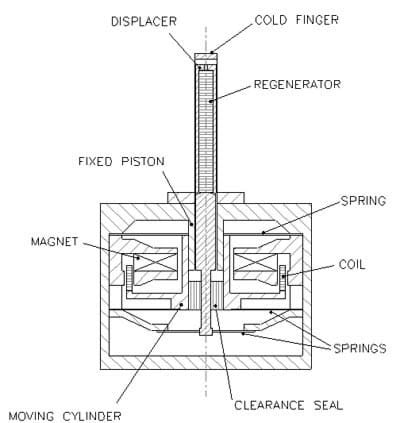