The Cryogenic Engineering Group has been involved in measuring and analysing cryocooler loss mechanisms for many years. Recently our attentions have focussed on the so called "compression loss", although we also maintain an interest in measurements of regenerator performance and other loss mechanisms.

A Stirling cycle cryocooler can be considered as undergoing an ideal cycle (with Carnot efficiency), with loss processes degrading the performance (a so called 'second-order' analysis). We have quantified these losses by means of an energy balance analysis in several machines. The input power and individual loss processes were all measured and an excellent energy balance was obtained, which led us to believe that we had accounted for all the processes of any significance. In all cases a significant proportion of the power delivered to the gas (45% in one case), was accounted for by one process which was proportional to frequency, swept volume, and peak-to-peak pressure. We measured this loss in a number of different cryocoolers and over a wide range of variables. It therefore appeared to be some thermodynamic cycle which was quite independent of the refrigeration cycle, taking place in the ambient temperature part of the system as a result of cyclic pressure changes.

One mechanism which had not been accounted for was imperfect heat exchange between the gas and cylinder walls. Several theoretical and empirical correlations have been produced for this but none could fully explain the loss. Although we have no detailed understanding of this thermodynamic process, we did produce an empirical correlation which was incorporated into a computer based model for Stirling cycle coolers. This very successfully predicted cooler performance over a wide range of cooler size and operating temperatures from 60 K to 300 K. Although the loss can only be directly measured in split Stirling cycle machines, due to the ability to hold the displacer stationary, it is likely to also occur in both pulse tube machines and linear alternators, due the similar geometries. The loss is large enough that a modest reduction in its value would produce a significant improvement in cryocooler efficiency.

One problem inherent in studying this effect is the complex geometry of cryocoolers. We have therefore begun a project to study the loss using an existing moving coil compressor (of a relatively old design), with the simplest compression space geometry, a flat cylinder head. Measurements have been made of the intrinsic motor losses (including windage with different pressures and gases), and the power delivered to the gas. We intend to use these measurements to develop models of the losses and hopefully reduce them in future machines (including pulse tubes and linear alternators). 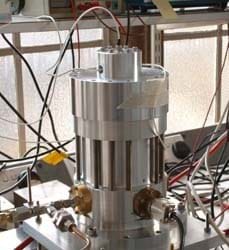