Near-ambient refrigeration has been dominated by the vapour compression cycle but the discovery of depletion of the stratospheric ozone has led to bans on certain organic refrigerants, and it is possible that their replacements may also be banned in time. Suitable climatically benign alternatives are either extremely exprensive, toxic, corrosive or flammable. There is therefore a need for research into alternative near-ambient cooling systems. Since domestic refrigeration is a major use of electricity, accounting for about 13% of UK energy consumption, it is clear that energy efficiency will also be important for future machines. Although "high efficiency refrigerators" are currently available they are still considerably less efficient than that theoretically possible using a Stirling cycle device. 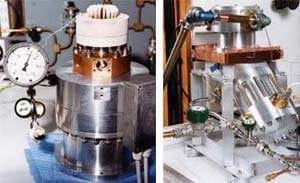 We have conducted research into Stirling cycle machines with appropriate capacity for the domestic refrigeration market using our flexure spring/clearance seal technology. This eliminates the losses with the crank mechanism in existing rotary compressors, and allows efficient part-load operation. In our most recent studies, jointly funded by EA Technology and the UK Department of the Environment, we developed a prototype "proof of concept" device which was mounted into an existing "freezer" cabinet. Two devices were produced, one for laboratory experimentation and optimization, operating at 37V, and one for the freezer cabinet which operated at 240V. We demonstrated an improvement of 12% compared with the equivalent conventional freezer, and this should be regarded as a minimum. The cooler also showed efficient part-load operation with Coefficients Of Performance (COPs), 80% higher than a conventional compressor of the same duty. The potential for significantly quieter and vibration free operation was also demonstrated.

Two other projects we have recently worked on were a handheld cryocooler for the Ministry of Defense (left below) and a 500 W cooler for large scale refrigeration (right below). In the right hand picture the handheld cryocooler is included for comparison. Note the extreme range of size, the handheld device had a swept volume of 0.14 cc, the large machine had a swept volume of 158 cc per side. 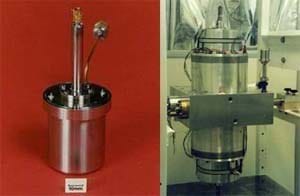