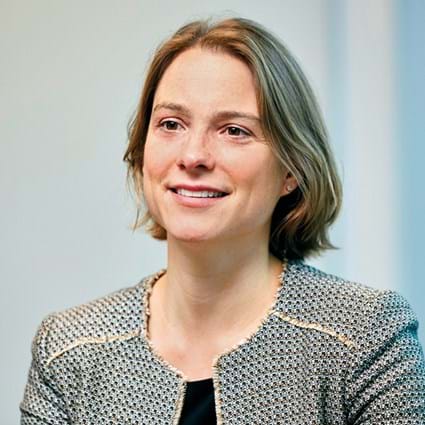 Laura Mason, Oxford Engineering alumna and CEO of Institutional Retirement at Legal & General, tells us how her studies proved invaluable in the business world and discusses the partnership between L&G and Oxford University.

Laura Mason first came to Oxford University as an undergraduate in the Department of Engineering Science.

She went on to complete her DPhil here, choosing to specialise in neural networks and signal processing. Her thesis focused on the analysis of brain frequencies to monitor respiration in a non-invasive fashion.

Alongside her Engineering Science expertise, Laura is a qualified actuary. That role sees her dealing with risk and uncertainty in complex financial systems – but that’s not as big a leap as you might think.

"Engineering gave me the ability to solve problems, and to look at things in a unified way"

“My career path ended up being very different to my studies,” says Laura. “But engineering gave me the ability to solve problems, and to look at things in a unified way. It allows me to take financial systems as a whole and spot where the issues are, approaching them from different angles.”

Her career began in consultancy, a career in which Oxford’s broad-based engineering course proved particularly helpful. Having studied so many different facets of modern Engineering Science, from energy engineering to biomedical, she had developed the ability to quickly find her feet when working alongside various different businesses.

After eight years in consultancy, it was time for Laura to move on. She joined financial services group Legal & General, initially with responsibility for Annuity Investment. In January 2018, she was named CEO of the firm’s Institutional Retirement arm, which assists companies with their pension schemes and works to secure their members’ benefits.

In 2019, Legal & General announced a major partnership with Oxford University, worth an impressive £4 billion. It will see the University working together with L&G to develop homes for University staff and students, together with science and innovation districts in and around Oxford. As well as much-needed graduate accommodation, the project will see subsidised housing for staff, which will help Oxford compete with other universities that have more capacity in this area. New science parks will bring together academic departments, University spin-outs and commercial partners, working together to create new companies and high quality jobs.

For Laura, her part in the project was a chance to give back to the University. “I loved my time at Oxford and I was delighted to have a chance to help the University advance its future,” she says. “My colleagues and I are delighted to have formed this partnership, and we’re looking forward to working together to address some of the most pressing challenges facing higher education today. Great universities, like Oxford, need the infrastructure to attract people and businesses with world-leading potential. It’s great for the students who are learning there as I did, as well as for the academics I had the opportunity to learn from.”