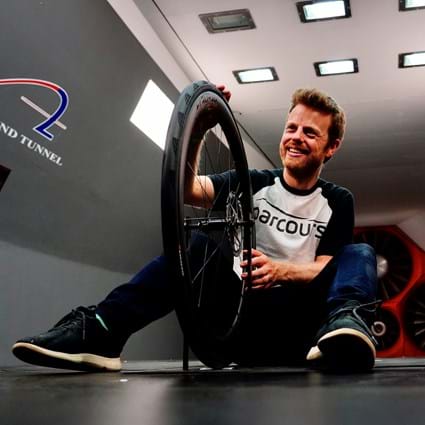 Alumni Dov Tate is the founder of Parcours. Parcours is a leading performance cycling wheel manufacturer, that aims to make aerodynamics in cycling more accessible and compete with more expensive brands, whilst being backed up by scientific evidence.

Dov studied for his undergraduate degree at Worcester College, matriculating in 2004, and graduating in 2008. We spoke to Dov about starting his business and how his Engineering background has helped along the way.

What inspired you to go into engineering?

Looking back, it was inevitable that I would go into engineering because I always wanted to know how things worked. I was the kid that was always making stuff out of Lego, trying to design things and it was that channel where I could really unleash my creativity.

The nice thing is that I've come full circle now and I'm back in a world where that's what I do for a living - I make and design things.

Tell us a bit about your time in Oxford.

I came to Oxford, having done a gap year working in the engineering industry. I was part of a scholarship scheme with a subsidiary of British Aerospace. They took high achieving students straight from school and put them through a year of industry placement. Afterwards, you start your engineering degree having had this experience.

So when I came to Oxford in 2004, I had some idea at the time as to what type of engineering I wanted to end up in, such as working in aerospace, but as I went through my degree, I realized that there was a lot more to engineering than I had originally thought.

Probably the biggest takeaway was discovering how broad the engineering world can be, and I think that was really interesting and not something that I perhaps appreciated before.

I did a second year coursework module at the BMW factory, it combined engineering with business as opposed to pure theoretical engineering.

When I graduated, I went into the city [finance] for eight years. I have to have the most inauspicious start imaginable. Because of graduating in 2008, my first day in the office in the City of London was the 15th of September, which was the morning that Lehman Brothers went under.

When I was going through the milk round, the two most attractive job offers I had on the table to choose between were the firm that I eventually went to and an offer from Lehman Brothers!

I got into it because I was four or five years into my banking career and four or five stone a bigger man than I was when I finished my degree. The success of Bradley Wiggins in the Olympics meant that everybody was cycling, so I went out and bought a bike. That interest in cycling grew and grew and grew, and then eventually in late 2015, after a few years of working in investment banking, I was looking for something that I could do for myself rather than for somebody else.

In terms of the Genesis of the business, it was the classic that people say when you start your own business it helps if you're your own first customer. I was looking to buy a new set of wheels for my bike. You could either buy something cheap and cheerful that would fall apart after a couple of years or spend a lot of money on something super long lasting and stylish and high performing - but there was nothing in between.

I realized that there was this gap in the middle for a well-priced option for a bike wheel that would perform as well as the top end stuff, but you would also have a decent amount of science, data and supporting evidence behind it.

When I saw the gap I thought, well, I've got my engineering background, specifically a decent working knowledge of aerodynamics and materials, both from my work placements before and from my studies, and if I can apply my knowledge to that middle ground, then there's opportunity there. That's where the business was born.

In late 2015, I had the idea and then I spent the first half of 2016 working on it whilst still doing my day job. That involved getting on a plane for a weekend to fly out to the US to go to a wind tunnel to test a couple of prototypes, while telling my boss I was at a stag do!

Why did you have to travel to the US?

The reason I had to travel to the US is that for precise cycling you need a very specific type of wind tunnel. Most wind tunnels in academia and industry are focused on higher speed applications, whereas for a cycling product, we test at 30 miles an hour. If you run high speed wind tunnels at lower speed the accuracy is all over the place. When we're trying to test products to differentiate between, for example, one wheel and another, you need much higher resolution data, which means you need a specific facility.

There was a specific facility in North Carolina which became the benchmark for the cycling industry at the time. I wanted to use that to say that any data I presented when I launched the business was immediately credible. Just having a photo of you in that wind tunnel, it's got a very distinctive triangular fan pattern with an orange triangle, is a stamp of credibility in the Cycling World. It said that you've been to A2 and everybody knows that that's a good wind tunnel. 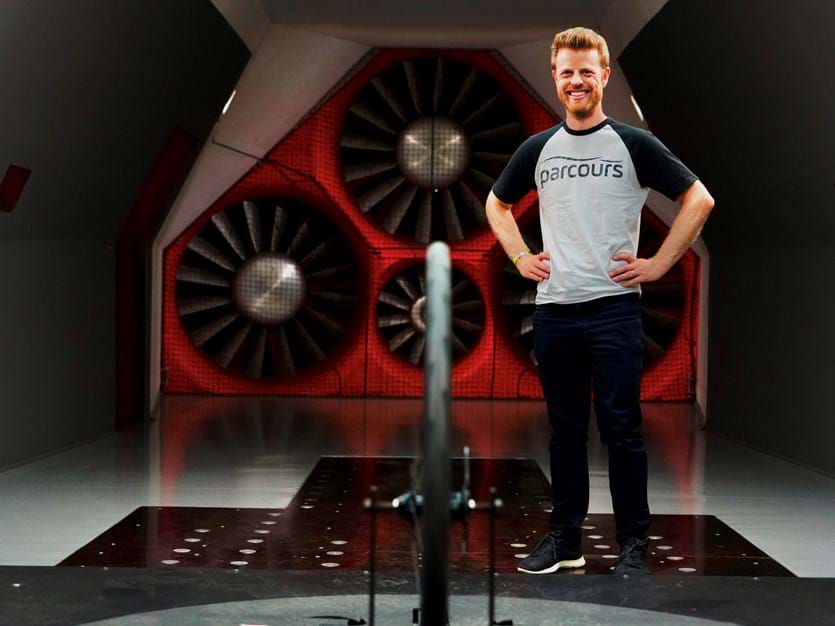 Dov at the A2 wind tunnel in North Carolina

What else did you do when setting up the business?

The other important step in terms of getting the business originally set up was spending two weeks out in China at the factory. I was speaking to different suppliers and working through the manufacturing process because I had a product that was ready to go, but it's no good having a design if you can't actually get made. Spending two weeks out there was really interesting because all of a sudden I found myself leafing back through some old material science textbooks trying to get back up to speed on different terminology that you would use for different types of carbon layer.

That was a real back to school moment, trying to remember some of those materials science lectures. It's amazing how every so often something that you picked up on or something that you studied actually pops up in real life and you think “oh, this is why we need to learn this!”

What have your proudest moments been over the past five years?

Back in January 2020 we had a big launch day for a new wheel that we launched. We hired a race track, had the tech editors from major cycling publications all sitting in a room and I gave a 45 minute talk around the R&D (research and development) process behind the wheel and they were totally transfixed and that was the moment when I thought “You know what, this might actually work”

Then there have been a couple of other moments over the last couple of years where I've been watching, almost a World championship race and seeing people in the field riding on my product.

Probably the smallest, but also the biggest win has been when I've been out on my bike, and I'll stop at a set of traffic lights and somebody I've never met before pulls up next to me with a set of my wheels on their bike.

When you get moments like that you realize that what you've done is actually having an impact somewhere. Somebody is enjoying their cycling more as a result of something you've done.

How has your Engineering degree helped you?

From a business perspective, the tagline that I've always approached things with is making aerodynamics accessible, and I've approached that in two ways. Firstly it's making it accessible in terms of price, but then it's also around how we talk about things. If you look at the website, all of our test data is 100% transparent. There's no sales spin or marketing babble applied to it. That's something that's been commented on by customers and journalists, and pretty much the whole industry is that we've done a really good job of communicating our data and analytics versus a lot of other people.

Thinking back to my degree days, having been through the tutorial process, you know that you're going to get grilled over any answer that you give. So you spend half your time answering the question and half your time anticipating how you're going to be grilled over it. And that's been really helpful because that means that when I'm being interviewed by a journalist, speaking to a customer, or when somebody is posting something on an Internet forum, the answer’s already there.

Sometimes I look at the cycling tech journalist I think “Sure you might be scary to a lot of people, but you've never sat in tutorial, you didn't write the textbook, so you don't hold the same level of fear”

I might not have appreciated it fully at the time, when you're running into a tutorial with a half finished worksheet, but in hindsight it was quite good for me.

Legged robot navigates by learning from its mistakes