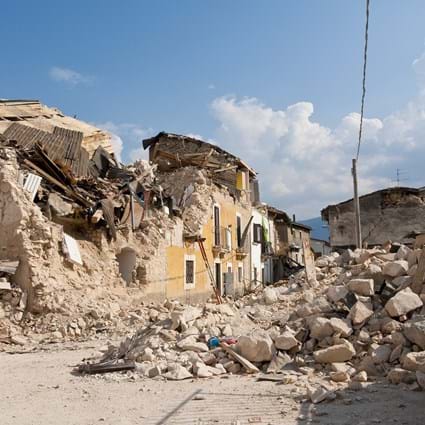 Information Engineers to the Rescue

A unique project involving University of Oxford Information Engineers is integrating the skills of computers and people to enable a more effective response to natural and man-made disasters, as well as tackling a wide range of other problems.

Disasters pose huge challenges for crisis response teams, who need to know as quickly as possible the extent of the disaster, and where aid is most needed. Vast quantities of relevant data can rapidly be generated from sources such as satellite images, but the difficulty is how to process data in a way that can best inform rescue efforts.

The solution might seem obvious: use computers to do the analysis. But computers are not always good at finding meaningful patterns in large amounts of unstructured data, or understanding the complex human problems described within it. It can also be difficult to determine which data and observers are most trustworthy.

Researchers at the University of Oxford led by Dr Steven Reece (Machine Learning Research Group) have developed an innovative approach to this problem by fusing the skills of human beings and computers, and employing ‘deep learning’ to enable computers to become better at analysing unstructured data. An early version of this approach was trialled in the days following the 2015 Nepal earthquake, and used in earnest in the aftermath of Hurricane Irma in 2017, the most powerful Atlantic storm in a decade.

The Planetary Response Network, launched on the University’s Zooniverse Citizen Science platform, responded quickly to the unfolding disaster by recruiting an online crowd to analyse ‘before’ and ‘after’ satellite images of the islands devastated by Irma. Sophisticated machine learning tools employing probabilistic reasoning were then used to reconcile inconsistent responses, filter the reliable sources and aggregate the data. This generated the best information possible from the smallest number of imperfect observers. Working in partnership with Rescue Global, a respected international crisis response charity, the analysis enabled the team to build impact ‘heat maps’ that identified areas in need of urgent assistance, and informed Rescue Global’s work on the ground.

Now, the machine learning tools developed by Dr Reece’s group are no longer so dependent on the crowd to do the initial analysis. Advanced computer image processing methods have been trained to mimic the crowd, and both machine and humans work alongside each other to label the entire satellite image corpus.

As a result the technology is being opened up to other applications. One project, in collaboration with the charity Save the Elephants, is using satellite images to help resolve human-elephant conflicts in Kenya. Another is working with the Brazilian government to identify the location of dams in the country, many of which are built by private companies without the government’s knowledge. A third project will work with earth scientists to identify seismic faults which are extremely hard to spot on the ground, but which are responsible for a large number of medium-sized earthquakes that cause substantial damage. The researchers co-design solutions with field practitioners for a wide variety of problems where no ‘off the shelf’ solution currently exists.