“Initially, microfluidics was used in the inkjet printing industry in the 1950s, but subsequently found applicability in a plethora of fields where manipulation of volumes at the micro-scale was needed, such as molecular analysis, biodefence, molecular biology and microelectronics” explains DPhil student Cristian Soitu, who is researching the development of microfluidic devices.

“Amongst these, capillary driven test strips are probably the most popular microfluidic devices, with well-known products such as diabetes and pregnancy testing. These devices use the principle of passive liquid transport via capillary forces to offer readouts within minutes.”

Microfluidics is the technology of manipulating fluids, with volumes as small as 1 billionth of a litre, within networks of channels. With uses in biomedical experiments, microfluidics provides many benefits, such as requiring small volumes of samples, precision control and short analysis times. However, it is not currently widely used in biomedicine.

Cristian explains, “Although microfluidics has great potential, its uptake by the biomedical community has been poor. The solid, often opaque walls of conventional microfluidic devices prevent us from getting the physical and optical access we want so badly for our samples. Additionally, biocompatibility issues only broaden the mismatch between what biologists need and what engineers produce.”

The Walsh Group (Engineering Science) that Cristian belongs to, has been collaborating with the Cook Group (Sir William Dunn School of Pathology) in addressing these issues by using fluids as building blocks. “The core idea behind ‘freestyle fluidics’ is that solid walls used to confine liquids in the macroworld can be replaced in the microworld by fluid ones.”

“Over the last four years we developed several methods to create, reshape, and use these fluidic structures. Our latest paper represents an important milestone in this effort, as it introduces the most accurate, precise and reproducible method to create microfluidic devices with fluid walls.”

Their research uses one of the properties of liquids we see in our everyday lives. The fact that oil and water cannot mix means they are ‘immiscible’ with each other. As Cristian adds, “The method consists in using an immiscible micro-jet to displace the aqueous phase off the surface of the dish in a manner analogous to pressure washing a patio.”

The group’s most recent paper–Jet-printing microfluidic devices on demand–introduces a transformative way to create complex circuits for biomedical research. Jet-printing makes possible the fabrication of microfluidic devices in minutes, almost as quickly as the circuit pattern can be drawn on paper, using only materials and apparatus commonly found in most bio-labs. For instance, the image below depicts the human circulatory system fabricated in a uni-well microplate in <30 min. 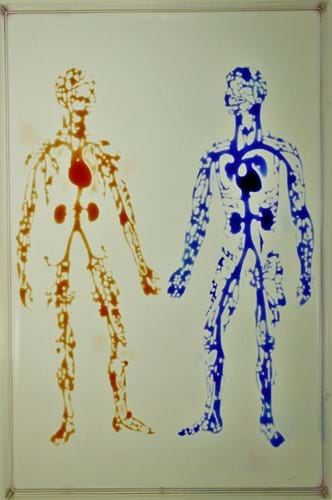 This presents a new avenue for research, “At a theoretical level, unlike flow through a pipe, where there is a solid theoretical framework in place (developed over decades) to guide experiments, flow through channels with fluid walls represent an unchartered territory in engineering. We are dealing with a system where the walls are morphing continuously to accommodate changes in pressure, which makes this a complex exciting problem to look at.”

“In summary, this work describes simple methods for miniaturizing some common workflows in biology.” It also reveals other insights, Cristian adds, “Besides proof-of-concept applications, this work introduces several important results, relevant in biomedical research: beating the Poisson limit during cloning, a perfusion system that can continuously feed cells for over a week, and a method to sub-culture adherent cells without using any reagents.”

In terms of how the work is presently being adopted Cristian explains, “So far, our technology was successfully applied to accelerate single cell cloning workflows in biology. Additionally, our lab has various collaborations with other groups in Oxford, such as developing novel chemotaxis circuits, perfusion devices, and systems that can accommodate 3D cultures. Importantly, our group is in a constant quest to find other avenues that exploit this technology, even outside life sciences. For instance, in the video provided we demonstrate how ‘smart’ fluids can solve mazes.”

Small dish with a maze structure inside

The next steps from this research go into more complex networks, “One of the main directions we will try to follow revolves around 3D cultures. As the cell culture models in both academia and industry experience a shift towards 3D (spheroids, organoids, etc.), it becomes important to accommodate similar assays in microfluidic environments with fluid walls.”

However, it is likely to become a popular technique, “The diversity and flexibility of this approach is expected to lead to widespread adoption of the technique for a variety of applications in biomedicine.”