Researcher wins bronze at the STEM for Britain Awards 2022

Post-doctoral researcher Dr Jorge Corral Acero is awarded a bronze medal for his poster presentation at the 2022 STEM for Britain Award final.

Dr Jorge Corral Acero, from the Department of Engineering Science at the University of Oxford, was awarded the coveted bronze medal at this year’s STEM for Britain awards, for his poster presentation on his research in 3D analysis of the heart for identifying risks post heart-attack.

Dr Jorge Corral Acero, of the Institute of Biomedical Engineering, was recognised for his research ’Automated 3D Shape and Contraction Analysis of the Heart to save lives after a Myocardial Infarction'. Every five minutes someone is admitted to a UK hospital with Myocardial Infarction, commonly known as a heart attack, where currently 7/10 people survive. Due to advances, more patients are surviving heart attacks, yet there remains a high likelihood of other cardiac complications with 12% mortality rate within six months for these survivors.

“It is definitely a moral and energy boost towards the next adventures and challenges that are yet to come."

He investigated solutions, by exploring 3D shape and contraction patterns, to address and improve the ability to predict post-infarction risk and to automatise this analysis, ultimately contributing to save the lives of thousands of patients. He explains in his poster the process of using mathematical modelling to obtain the personalised shape and contraction of a patient’s heart. 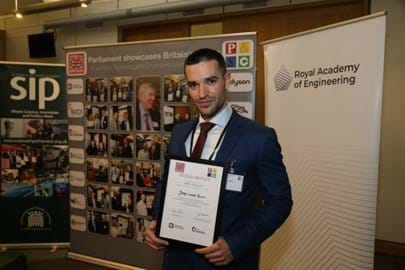 “The application and preparation processes led me to reflect a lot about my own research and to recap on its essence, many times forgotten in the day-to-day technical details.”

Dr Jorge Corral Acero explained what this achievement meant to him; “Being given the opportunity to share my research at the Parliament was a huge honour. The medal is the icing on the cake of an exciting PhD journey that has just concluded. It is definitely a moral and energy boost towards the next adventures and challenges that are yet to come.”

This research aims to automatise the analysis of patient’s heart following a heart attack to save clinicians time, as well as improving the prediction of risks of secondary outcomes such as reinfarction or death. Advancing the understanding of cardiac diseases, Corral Acero hopes that his research helps the lives of many more patients.

“The main lesson learned through the interaction with politicians and policymakers was the importance of being able to communicate your research. In this regard, the application and preparation processes led me to reflect a lot about my own research and to recap on its essence, many times forgotten in the day-to-day technical details. I would also highlight the networking with professors and peer finalists, and the exposure to their promising research projects from other subjects.”

Corral Acero is a postdoctoral researcher in Cardiac Computational Medicine, his research involves utilising engineering tools to better understand how cardiac anatomy modulates human cardiovascular diseases. As well as being involved in many different research groups, such as Biomedical Image Analysis, he also collaborates with the John Radcliffe hospital and the German Centre for Cardiovascular Research. His research is funded by the prestigious Marie Sklodowska-Curie European programme, as part of the Personalised In-Slico Cadiology Consortium, and by the UK Research and Innovation Council.

“I first applied last year, but I was not selected until I tried again this edition. While the chances of acceptance are low, the application is quite straightforward and the experience very enriching. I would encourage others to reflect on the essence of their research and give it a try!”

Corral Acero presented his research to the Houses of Parliament on the 7 March 2022, competing with 33 other finalists. We want to congratulate Jorge on his amazing achievement.

Read more about his research here and watch his poster presentation below: