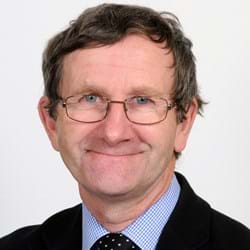 He read for a PhD at what was then Trent Polytechnic, where he was subsequently given a lectureship. In 1983, David went as a visitor to the University of Michigan, and returned to Oxford, to forerunners of my present positions, in 1984.

In 2006, David was appointed Editor In Chief of the International Journal of Solids and Structures. He was the I Mech E Donald Julius Groen Prize lecturer 2015 in 'Contacts, Friction and Fretting.'

David is interested in contact mechanics, fundamentally, and in fracture mechanics, and where these subjects intersect; that is, he particularly studies the nucleation of cracks originating from the edges of notionally stationary contacts but where there is a small amount of differential movement. This phenomenon, usually called 'fretting fatigue', is the root cause of many failures in gas turbines, as the roots of all blades suffer, to some degree, from this problem. One area in which he has made a number of fundamental contributions is that of understanding 'partial slip' contacts - these are contacts where the loading regime is such that parts of the contact remain wholly adhered while other parts suffer small amounts of differential motion - fretting- which lead to surface degradation and hence crack nucleation.

He directs the Rolls-Royce plc University Technology Centre in Solid Mechanics which encompasses various other forms of applied mechanics research including impact and high strain rate mechanics and incorporates a significant amount of research into residual stresses.

Beyond fretting fatigue, his own personal research interests include the frictional damping of dynamic systems and studies of wear, the latter particularly related to contact problems where the wearing surface is 'buried' or where the differential movement is very small.

An EPSRC & Rolls-Royce plc jointly sponsored project under the Prosperity umbrella. This is concerned with developing fundamental methods of designing against fretting fatigue in turbine blades, and understanding/quantifying wear and fretting fatigue in spline jointed shafts.

This undertakes fundamental research in a wide range of topics related to the mechanical integrity of gas turbines.

This project is concerned with the modelling and experimental determination of the strength of wellhead/riser terminations subject to random loads.

I am interested in supervising research students whose primary interests are in a branch of solid mechanics.