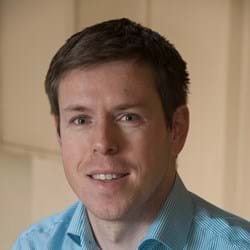 Prof. Fallon studied Electronic Engineering at University College Dublin. His PhD research in the field of acoustic source tracking was carried out in the Engineering Department of the University of Cambridge.

Immediately after his PhD he moved to MIT as a post-doc and later as a research scientist in the Marine Robotics Group (2008-2012) working in robot mapping. From 2012-2015 he was the perception lead of MIT's team in the DARPA Robotics Challenge – a multi-year competition developing technologies for semi-autonomous humanoid exploration and manipulation in disaster situations.

The Oxford Robotics Institute are playing a key role in two of the four Robotics Hubs funded by the EPSRC as part of their £44.5 million investment over the next three and a half years into Robotics and Artificial intelligence (AI). More details here.

Researcher from Prof. Fallon's group contributed to Team Cerberus in the DARPA Subterranean Challenge - developing a team of robots to explore mines and caves. The finals of the 'SubT' were held in a huge mine in Louisville in September 2021. Cerberus won the top prize of $2m.  More details here.

Prof. Fallon's research is focused on probabilistic methods for localization and mapping. His research focus on state estimation and mapping for dynamic robots (quadrupeds, handheld devices and even drones). He is also interested in dynamic motion planning and control. He focuses on developing methods which are robust in challenging situations (darkness, underground, outdoors) using probabilistic sensor fusion.

I am interested in supervising research students in navigation, mapping and motion planning for robots, particularly dynamic and/or legged robots.