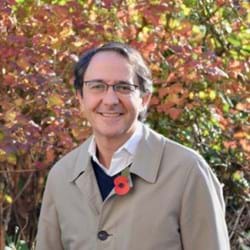 Paul Stavrinou is an Associate Professor in Photonics and Fellow of Lincoln College.

Before joining Oxford (again), Paul was a Reader in Physics, Director of the Plastic Electronics Centre for Doctoral Training (PE-CDT) and co-Director of the cross-faculty Centre for Plastic Electronics (CPE) based at Imperial College London. While at Imperial, he was an EPSRC Advanced Research Fellow, investigating metallic nanoscale photonics, and was part of the team awarded an Imperial College Research Excellence Award. In 2011, the PE-CDT was awarded the Leadership in Education Award from the US-based FlexTech Alliance.

He is also a visiting Professor in the Department of Physics at the University of Montreal and a co-investigator for the newly established Oxford Suzhou Centre for Advanced Research (OSCAR) in Suzhou, China

Paul’s research interests span the development of materials (organic and inorganic) for photonic applications and optoelectronic devices, such as lasers, solar cells and electro-absorption modulators; the common themes all involve light-matter interactions and the flow or routing of radiation within structures.