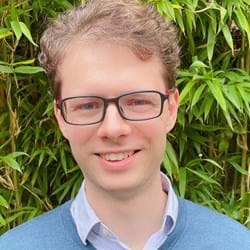 Wouter Mostert earned his PhD at the University of Queensland in 2015, on the topic of hydrodynamic stability of magnetohydrodynamic implosions, with application to inertial fusion energy, and in the propagation of shock waves. As a postdoc, he continued in this work at Caltech, before moving to study breaking ocean waves at Princeton University. He continued with this research as an Assistant Professor at the Missouri University of Science and Technology, before joining Oxford in the Environmental Fluid Mechanics group.

Wouter Mostert has interests in fluid mechanics, namely in air-sea interaction and flux of mass, momentum and energy primarily due to wave breaking, along with the associated dynamics of bubbles and droplets, which play a large role in these kinds of problems. He is further interested in the effects of ocean wave systems on sediment and pollutant transport, along with better understanding wave loadings on civil infrastructure.

His current interests are in understanding energy, bubble and droplet statistics in plunging breakers; in wind-driven spume generation processes in ocean waves; in the dissipative properties of shallow-water breakers and coastal wave systems; and the combined effects of wind, waves and storm surge on coastal infrastructure.

Bubble deformation by a turbulent flow