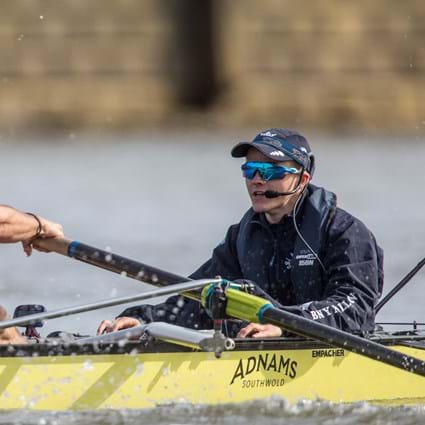 A Salters' Graduate Award is just the latest achievement for MEng alumnus Sam Collier, whose time at Oxford also saw him cox the rowing team to victory in the 2017 Oxford-Cambridge Boat Race.

Studying for his MEng in the Department was in itself a significant undertaking, but Sam put in the hours on the river, too. In fact, he says, the hours spent practising proved beneficial when entering his final year: “I definitely wouldn’t have done as well, had I not rowed in my previous years,” he says. “I didn’t do any coxing in my final year, but my previous experiences with Oxford University Boat Club (OUBC) have taught me so much about time and project management, as well as how I learn most efficiently. It felt like I just had loads of time to enjoy Oxford this year – and to catch up on that sacrificed social life!”

In Easter 2018, Sam’s hard work was recognised when he received a Graduate Award from chemistry organisation The Salters’ Institute. These awards recognise candidates who are smart, entrepreneurial, able to communicate and collaborate, and who have the potential to occupy leading positions in public life and in the UK chemical industries.

The support of my tutors and friends at New College, as well as other engineers, was invaluable

Sam, who specialised in Energy Engineering in his final year, supervised by Professor René Bañares Alcántara, says: “The prize is £1,000, but more significantly, access to the networking events that Salters’ puts on, as well as the honour of being recognised by a major chemistry institute. I am extremely happy to have been awarded it, and I have my supervisors to thank for suggesting I apply”.

As for balancing the demands of the Engineering Science course and his sporting commitments, Sam says: “Balancing the course with OUBC was definitely challenging. Both demand an awful lot of your time and the art of succeeding lies in finding ways to compromise that still allow you to do really well at both”.

“To be honest, in my case that often meant that a real understanding of the material only came in Trinity term, and my social life often suffered. As such, the support of my tutors and friends at New College, as well as other engineers in the Boat Club, was invaluable.”

Sam is now taking a well-earned break before pursuing his engineering career: “I’m planning to spend a year travelling and learning some coding and data science”.