A collaboration between the Department of Engineering Science and the Conservation Department at Oxford’s Pitt Rivers Museum is testing the limits of 3D-printing by creating playable replicas of antique musical instruments.

The Pitt Rivers Museum collection houses over 7,000 musical instruments from around the world, over 400 of which are made from bone or ivory, such as ivory blast trumpets and bone flutes. The museum often receives requests to play them from members of originating communities, researchers and students.

Unfortunately, many of the instruments are either too fragile to be played and risk being irreversibly damaged, or else have been contaminated by old pesticide treatments which now pose a health risk to anyone wanting to play them.

The Plastic Fantastic project could be the answer: funding from the Oxford University IT Innovation Challenge fund is allowing researchers to test the latest in 3D-printing technology in an effort to find materials and methods which can closely reproduce the sound and feel of the original instruments.

They are testing the process on playable historic musical instruments in the University’s Bate Collection of Musical Instruments, housed at the Faculty of Music. This collection, together with the large range of printers at the Department’s newly established 3D-Printing Lab, offer an unmissable opportunity to help solve this problem.

Colleagues at Cranfield University CT scanned a playable 17th-century ivory recorder made by John Goddard of London, allowing the Oxford researchers to build up a 3D model of the recorder. The scan also included accurate details of the inside of the instrument, vital for replicating its sound.

Using the scans, the Oxford team printed five replicas, using a range of materials and different 3D-printing methods. Although the CT scan of the ivory parts was excellent, that of the wooden elements was less successful, possibly due to woodworm damage and areas of low-density wood. The team resolved this issue by reverse engineering the wooden block using modelling software.

On the 14th of September, as part of the Oxford Open Doors weekend, the team invited members of the public to listen to a performance of the original instrument alongside all five replicas, and asked them to vote on how close each replica sounded to the original. The results have not yet been published and further testing is due to be carried out, but there was clear difference between the replicas, with one judged to sound even better than the original!

Further tests, including testing the mechanoacoustic properties of the flutes and raw materials will be carried out by an Engineering Science 4th-year student during the coming academic year, in a project which will also involve Head of Department Professor Ron Roy and Dr Jason Raymond.

The project’s successes, problems and any hidden pitfalls are being documented along the way, in order to assist anyone who wants to replicate ivory instruments in future. 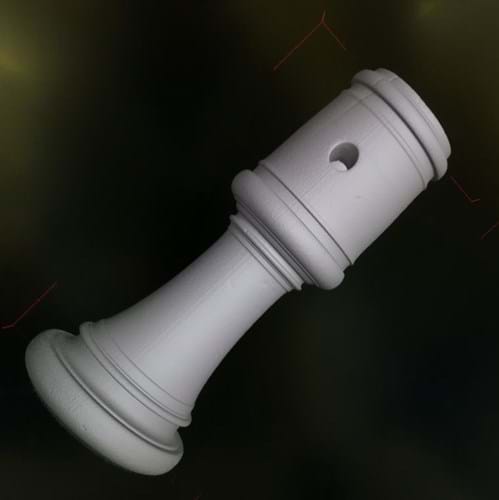