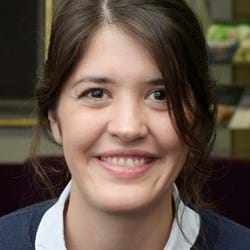 Natalia Ares works on experiments to advance the development of quantum technologies, with a focus on artificial intelligence for quantum device control and quantum thermodynamics. She joined the Materials Department at the University of Oxford in 2013. She was awarded a series of fellowships, including a Marie Skłodowska-Curie and a Royal Society University Research Fellowship, and was awarded a European Research Council Starting Grant in 2020. During her PhD she focused on silicon-based devices for quantum computing at CEA Grenoble, France. She completed her undergraduate studies in Physics and a Masters equivalent in the theory of quantum chaos at the University of Buenos Aires, Argentina, where she was born and raised.

Natalia's research is in novel approaches to advance the engineering of quantum processors. To unleash the potential of quantum technologies, the intrinsic variability between individual devices has so far been a major hindrance.

Machine learning as an enabler of qubit scalability

Displacemon Electromechanics: How to Detect Quantum Interference in a Nanomechanical Resonator