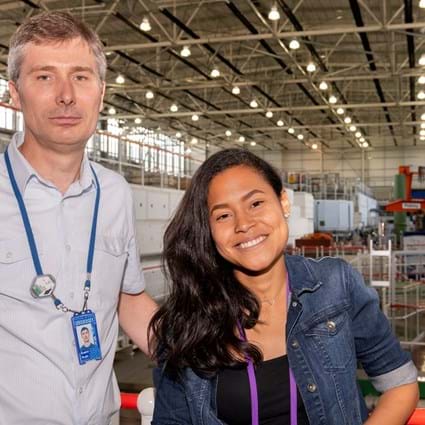 Researchers have been able to investigate the interactions between a drug molecule and the framework that can be used to trap it.

by Barbara Souza and Rosalind Davies

Metal Organic Frameworks (MOFs) are multifunctional materials that have attracted considerable attention in the last decade. Specifically, the copper-based framework HKUST‑1 is one of the most investigated structures in the basic and applied fields of MOFs research. This is due not only to its remarkable properties, but also because it is a reference material for the study of many general properties of MOFs.

DPhil student Barbara Souza (Multifunctional Materials and Composites Laboratory), in collaboration with Dr Svemir Rudic from the ISIS Neutron and Muon Source, has used inelastic neutron scattering (INS) for detailed characterisation of systems where a drug is encapsulated inside the MOF: known as a 'drug@MOF system'.

In particular, they were targeting the investigation of the low‑frequency vibrational dynamics within the terahertz (THz) region of the HKUST‑1 MOF. An improved understanding of guest‑host interactions is central to establishing pathways to control the binding/release of drug molecules from MOFs as carriers.

Souza's research team, led by Professor Jin‑Chong Tan, used a method of manual grinding to accomplish the encapsulation of the anti‑cancer drug 5‑fluorouracil (5‑FU) within the host framework (HKUST‑1) in situ, forming the composite 5‑FU@HKUST‑1.​

The team demonstrated that INS spectroscopy is a powerful technique to study the interactions between the drug molecule and the MOF and, more generally, the confinement effects from a vibrational point of view. By further understanding the dynamics of the encapsulation method, they demonstrated that the in situ one-pot strategy could be applied to directly contain molecules into the pores of the host framework.

Using the in situ method may have the potential to overcome the so‑called 'burst effect', where large quantities of the guest material are released within the first few minutes of encapsulation; currently a limitation to the practical use of many porous host structures as drug delivery systems.

This study used results from density functional theory (DFT) calculations carried out by Professor Tan's group in 2016 to compute the theoretical INS spectrum of HKUST‑1.

“Using INS, it is possible to measure the full vibrational spectrum to reveal how the presence of the drug molecule affects the terahertz (THz) dynamics of the host framework," explains Barbara. “We were able to observe modifications in the THz lattice dynamics of 5‑FU@HKUST‑1, marking the suppression of the motions at the heart of the HKUST‑1 structure due to drug encapsulation."

Other approaches such as FTIR spectroscopy and X‑ray diffraction have been used previously to elucidate the chemical interactions of drug molecules in MOF systems. This research demonstrates how THz vibrations can be used to unravel the detailed behaviour of guest‑host interactions by tracking the precise changes in its lattice dynamics.

The work has been featured on the front cover of the ChemComm journal, as well as receiving awards at the MOF2018 conference and the ISIS Molecular Spectroscopy Science Meeting 2018.

The team is now using their results to investigate the real time in situ monitoring of guest release from the host framework.

Schematic representation of guest–host interaction of 5-FU to the unsaturated metal sites located at the pore apertures of HKUST-1. Terahertz modes of HKUST-1 most affected by the presence of 5-FU guest, showing collective vibrations at (b) ~5.0 THz, (c) ~5.7 THz, (d) ~6.2 THz, and (e) ~8.3 THz. Arrows indicate the directions of the collective deformations with +/- amplitudes computed by Density Functional Theory. Colour scheme: copper in orange, carbon in grey, oxygen in red, hydrogen in white, nitrogen in purple, and fluorine in green.