Nadja Yang has been listed on the 2021 Forbes DACH 30 under 30 list for her work with European Young Engineers.

Engineering Science student and Rhodes Scholar Nadja Yang has been listed on the 2021 Forbes DACH 30 Under 30 list. The list recognises her work as President of the European Young Engineers (EYE), where she supports young engineers across Europe to engage in and broaden their horizons in the fields of energy, water, circular economy, STEM in politics, diversity within STEM, future of work, future skills and more.

Forbes DACH is the German-language edition of Forbes, covering Germany, Austria and Switzerland. Their annual list nominates 90 business and industry figures, 30 from each country in the DACH region, and selects 30 in a variety of industries. The list highlights those excelling in their careers and to showcase to the world how they aim to change the future for the better. It is a list of variety, with people from music artists, athletes, to scientists all of whom as Forbes say are, ‘changing the course -and the face- of business and society.’

On making the list Nadja says, “Words cannot express how grateful I am for this encouragement to continue representing the voice of Europe's young engineers to accelerate the technological advances needed and overcome grand challenges like the pandemic or climate crisis.”

“Words cannot express how grateful I am for this encouragement”

Listees are selected by reporters, editors and judges based on a variety of factors such as funding, revenue, social impact, inventiveness, and potential. Shortlists are shared with a panel of judges, and it is them who select the final top 30 for each category. Forbes has local country lists as well as three tent-pole lists in America, Europe, and Asia. Making Germany’s top 30 under 30 list is a considerable achievement. 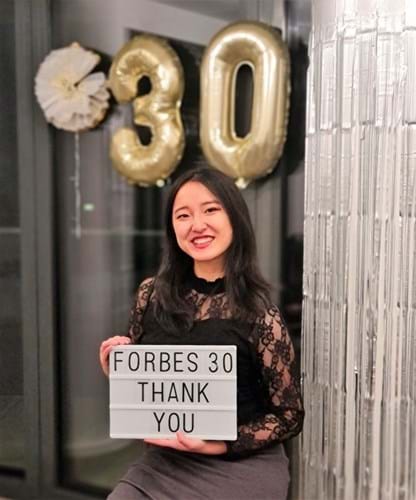 Currently, Nadja is pursuing a DPhil within Professor Aidong Yang’s Systems Engineering group, her research investigates the Urban Bioeconomy, looking into ways to make cities more sustainable. She initially studied Chemical Engineering at the Technical University of Munich and also has experience in industry, policy, and consulting.

“I realised what impact this organisation could have if its potential was fully unleashed.”

Nadja contemplated founding a start-up, “as I was (co-)founding three organisations during my time at the Technical University of Munich, I knew I thrive in entrepreneurship, but I just couldn't go for any of my ideas”’ However, EYE changed things, “When I found EYE, I realised what impact this organisation could have if its potential was fully unleashed.” Nadja chose to focus on the organisation and re-ignite the European Young Engineers.

As head of EYE, Nadja represents 500,000 young people from the engineering sector, some of whom making their way onto the Forbes’ list, inspired her to strive to do the same. Founded in 1994 EYE aims to “exchange information about technological developments and, as a collective voice in Europe, accelerate technological progress in the fight against future challenges such as pandemics and the climate crisis,” explains Nadja.

Within her previous Public Policy department, she increased membership numbers by 300%, with the number of working groups growing from one to five and kickstarted EYE to launch the Network of European Engineers in Politics (NEEP) this year.

Nadja concludes, “Congrat[ulation]s to all the listmakers! [I am] honoured to be on the same list as people whom I've followed before”

Read our recent interview with Nadja about her DPhil and her work with European Young Engineers.