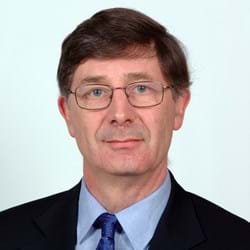 Professor Harvey Burd read Engineering Science at Hertford College, Oxford University from 1977 to 1980. After a spell working as a structural engineer with Ove Arup and Partners, he returned to Oxford to undertake post-graduate research in soil mechanics.

He was awarded a D.Phil. in 1986 and in 1987 he was appointed to a University Lecturership at Oxford University. He served as Chairman of the Faculty of Engineering Science from 2008 to 2009 and as Chairman of Examiners from 2010 to 2012. He is also an Official Fellow of Brasenose College where, in the past, he has held the offices of Dean and Senior Tutor.

Harvey is a Chartered Engineer and a member of the Institution of Civil Engineers. His teaching is principally in the areas of structural mechanics, soil mechanics and geotechnical engineering.

Professor Harvey Burd's current research interests include the application of numerical modelling procedures (principally finite element analysis) in Civil Engineering. Work in this area has included studies in reinforced soil, pipe-jacking and tunnelling. He also has research interests in (i) remote sensing and management of buried assets and (ii) The mechanics of accommodation and ageing in human eye.

Harvey has been involved with the development of the finite element program OXFEM that has been developed at Oxford University for the analysis of problems in Civil Engineering. A typical finite element mesh, illustrating the analysis of the interaction between a building and a shallow tunnel, is shown in the figure. Computational models of this sort may be used to assist in the design of tunnelling operation in urban areas.

Work has recently been completed on an EPSRC-funded project 'Mapping the Underworld'. This involved the development of new ways of locating and mapping the extensive network of buried pipes and other assets. The Oxford team (Professor Harvey Burd, Professor David Edwards, Dr Chris Stevens and Tong Hao) developed a system of passive devices which, when fixed to pipes before they are buried, makes them easier to identify when they are subsequently surveyed using surface-based electromagnetic techniques. A spin-out company, OXEMS, is currently developing this technology for applications in the water supply industry.

Harvey also has research interests in the area of Ophthalmic Engineering. Much of this research involves the application of numerical procedures, originally developed in the context of Civil Engineering, to the study of the mechanical and optical performance of the eye. He was the recipient of a Royal Academy of Engineering/Leverhulme Trust Senior Research Fellowship for the calendar year 2007; this Fellowship was devoted to research on the development of engineering methods for the study of accommodation and presbyopia. Together with Geoffrey Wilde, he has recently published a new set of data showing how the stiffness of the human lens changes with age.